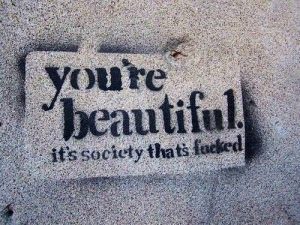 FUCK OFF AND LEAVE OUR CHILDREN ALONE

It is upsetting to read today that eating disorder hospital admissions have doubled in six years. Data from NHS Digital show admissions for conditions including anorexia and bulimia reached 13,885 between April 2016 and 2017; the highest levels seen in six years. The number of under-18 female admissions for anorexia has also doubled in the six-year period; from 961 in 2010-11, to almost 1,904.

So in light of this worrisome news, I read with a mixture of rage and incredulity that Weight Watchers are to offer under-13’s free membership to its weight loss program. According to the company they want to help “the development of healthy habits at a critical life stage.” You all know my thoughts, I’ve written several articles on the damaging effects of the weight loss industry.

Critical life stage, that’s a snippet straight from The Cult of Fat manifesto. Get em when they are young and impressionable, those fucker’s know exactly what they are doing. They claim it is not a diet ? It is a ‘lifestyle’ and they are correct, one of restrictive eating and intensive calorie counting. It is well documented that dieting particularly at a young age, is a precursor to developing disordered eating habits. And don’t let them fool you with their faux concerns over childhood obesity either, that’s a ruse. They made billions setting customers up to fail, no coincidence they have one of the highest rate of return customers. This ‘lifestyle’ opportunity is insidious manipulation that targets young teenage girls, their actions are morally reprehensible.

TIME FOR SOME LOVING

As it’s Valentine’s Day and I’m feeling the love, here’s a wee gift. I’ve written a letter, one you can print out and stick on the fridge. Forthwith, dump the diet culture and instead, go discover the practice of self-love. Time to embrace the most important relationship you’ll ever have; the relationship with yourself. With this in mind, end the cycle, if you’ve ever been on a diet (or still are) and have suffered/suffering the effects, would you wish that purgatory on one of your own? Set the example, show your children you matter, that you have worth and entitled to self-love. In turn, you will teach them how to value themselves. That is the true meaning of love.

Too long you have told us that we are not enough. Made us chase the illusion, but always shifting the goal posts. No matter how hard we try, we are never adequate. Conned us into believing that by following this diet or that lifestyle, we can attain the perfect body. We learned to restrict ourselves and view food as the enemy; you taught us to feel guilt and attach morality to our consumption.

Regardless of our compliance, we’re fed still more torturous ideals; impossible thigh gaps and Instagram bikini bridges. Our worth measured by how minimal we could become, applauded for being less. Like a manipulative abusive lover, you punched a hole into our psyche, mind fucking us all the way. You taught us to hate our bodies and in turn, ourselves.

But despite the mind control we’ve discovered we are absolutely enough. It is you, Cult of Fat who is impotent and obsolete. It’s either one day or day one and we ain’t giving you another day.  Time to get the fuck out of diet central and get down n dirty with some radical self-love.