If You Can’t Be Kind, Be Quiet

“Our lives begin to end the day we become silent about things that matter.”

Scrolling through my FB feed and there, a meme featuring a Golliwogg with a suggestive caption. Just when you think you kinda know someone? And I’m calling it out because silence is complicity.

The Golliwog is a racial stereotyping of black people created during a racist era. American author Florence Kate Upton created the Golliwog character in the late 1800s, based on a Black Minstrel doll that she played with as a small child. The Upton children used it for target practice.

Blackface was the practice of non-black people darkening their skin in deliberate attempts to impersonate black people. It became a form of white entertainment in the 1820s with the first minstrel shows. Minstrels imitated and mimicked enslaved Africans on Southern plantations. These performances characterised Blacks as lazy, ignorant and hypersexual, prone to thievery and cowardice.

Thomas Dartmouth Rice, known as the “Father of Minstrelsy,” developed the first popularly known blackface character, “Jim Crow” in 1830. Ironically, the same character that would lend his name to Jim Crow Law. Notably, laws that enforced racial segregation in the South after the end of the American Civil War in 1877 and the beginning of the Civil Rights Movement in the 1950s. 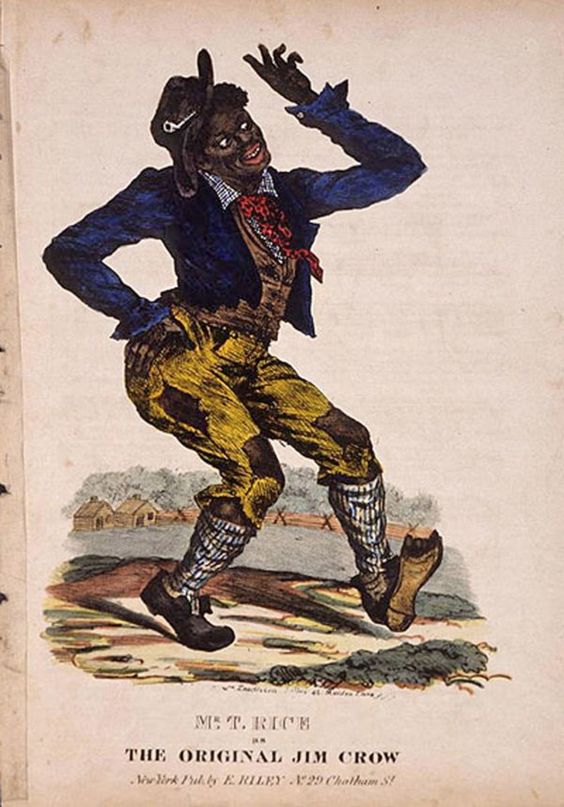 Consider the legacy of The Civil Rights Movement or the courage of people like Rosa Parks and all those who have endured centuries of prejudice and discrimination. Or the atrocities of transatlantic slavery and the subsequent treatment of slaves. Brutalities such as torture, beatings and whipping. Mutilation and amputation. The rape and sexual assault of men, women and children. Executions and lynchings were a common occurrence. The K.K.K, police brutality and segregation.

Growing up in the ’70s, racism was part of the fixtures and fittings. Living so far North, back then one rarely saw a person of colour, so my knowledge of black culture was extremely limited. At school, learning to read from the book, Little Black Sambo. My granddad loved Al Jolson, coupled with The Black and White Minstrel Show on a Saturday night. Or hearing my granny refer to black people as darkies and nig nogs. Golliwogs on jam jars and Jim Davidson’s Chalky. Saturdays and televised football, supporters across the country, monkey chanting and throwing bananas at coloured players.

Whilst racial prejudice was the norm, the truth of the matter was never discussed. However, all that changed after I watched Roots. Kunta Kinte, etched on my brain.
I had so many questions, the tv series had a huge impact on me. So, you can imagine my confusion when my mum would be in floods as she watched, yet, by the same token, use Kunta Kinte’s name comically when referring to persons of colour. But at least now I knew what racism looked like and as young as I was, had figured out being racist was a bad thing.

Atticus Told Me To Delete The Adjectives And I’d Have The Facts.

Dr.Martin Luther King wrote, “nothing in the world is more dangerous than sincere ignorance and conscientious stupidity.”

The ability to be ignorant, to be unaware of the history and consequences of bigotry, is a quintessential element of privilege. Privilege creates a sense of entitlement, the same entitlement that makes it possible for someone to post an image of a Golliwog with impunity. However, entitlement does not mean one cannot educate themselves on the facts. Given the amount of technology we have at our fingertips, there really is no excuse for staggering stupidity. Being racist doesn’t constitute as an opinion, opinions are ideas that are meant to be shared and debated. Depicting a person of colour as a Golliwog is not freedom of speech, it’s not a viewpoint; it’s racist.

Your Energy Introduces You Before You Even Speak.

Privilege combined with our dependency on technology has made us more of an ego-centric rather than eco-centric society. The further down the rabbit hole we go in pursuit of instant self-gratification, the less capacity we have for compassion and empathy.  Doesn’t matter if the wrapping is beautiful but the box is empty. And sympathy is not the same as empathy. Sympathy comes from a place of privilege, empathy is looking someone in the eye, realising you could be them and knowing the only thing that separates you is luck.

Irrespective of age, there comes a time in everyone’s life where, if you have a moral compass or an inquisitive mind, you assess the prejudices learned from family and the environment you grew up in, and make a decision to either reject it or remain ignorant. Each of us has a responsibility to become more conscientious than the generation before us.

I seriously can’t be arsed going all guru and listing reasons how not to be a twat. Google it.  If you think you could be a better person, chances are? I’m not a bigot because it’s trendy or politically correct, I just don’t like hurting people’s feelings and I know Karma’s a bitch.

I couldn’t give a shit about your sexuality, the colour of your skin or religious beliefs. As long as you are not hurting anybody, and it doesn’t involve children or animals, then we are all good. Nor will I not silence myself to make others comfortable. When the day comes that I look my grandchildren in the eye, I need to tell them I did not stay silent.

A racial slur such as Golliwog is not harmless banter, its offensive. But if you take offence nowadays, you’re labelled a liberal snowflake, all bleeding hearts and fragile feelings. Well society, fuck you. I ain’t no snowflake. I reckon the phrase is just an arsehole’s way of discrediting empathy and justifying a cunty vibe.

No act of kindness, however small is ever wasted. If my belief in equity, empathy and love makes me a snowflake, bring it.

Even the fiercest blizzards start with a single snowflake.

Revolution is in the air, and Winter is coming.