I dedicate this to Justice Ruth Bader Ginsburg – the notorious RBG. Now that was a woman who knew exactly what to do with the time that was given to her.

People are prisoners of their phones, that’s why they are called cell phones

If a tree falls in the forest and no-one is around to hear it. Does it still make a sound?

If it isn’t posted on social media, did it happen at all? Remember the old adage, eat to live, not live to eat? Nowadays people live entirely to Insta -the consumer and the consumed. Birth, marriage and death – EVERYTHING is done purely for the benefit of the voyeur and nothing is sacred.

I’d still say religion is the opiate of the masses, however, social media is fast catching up. Like a skittish horse that requires blinkers – phones are a societal sedative, one that make you tractable. And given the current political climate, that’s exactly what they want.

That one million species on Earth are now threatened with extinction. Since 1970, vertebrate populations have declined by 60%. While extinction is a natural process, it is the current rapid rate that is the problem. Studies suggest that extinction is now happening hundreds of times faster than the natural evolutionary rate and it is accelerating, thanks to us; homo sapiens- surely the stupidest and most destructive species on Planet Earth. It is only we who fuck each other over for a percentage while intentionally destroying the very thing that sustains us.

“yet do i fear thy nature; It is too full o’th’ milk of human kindness”

Not only are we the most ignorant, but the most intolerant and brutal. Politically, it would appear our world leaders have taken leaf from Lady Macbeth. One only need look around to see their cups doth not overflow.

Russia and Putin’s reign of terror, where his government can poison the opposition leader with impunity. Where it is not a crime to beat and hospitalise your wife/partner, but it is to be gay. In Chechnya, the Spring of 2017 saw police enforce a vicious large-scale anti-gay purge. Where men presumed to be gay or bisexual were unlawfully detained, beaten and tortured.

The mass exodus of Poland’s LQBTQ+ fleeing the country as their homophobic, fascist President Andrzej Duda is sworn in for another five years. With over a third of the country having created ‘LGBTQ-free zones’ – essentially hostile spaces for anyone who is not heterosexual or committed to the so-called “natural family.”

Belarus, Europe’s closest equivalent to North Korea, has been controlled by the same man since 1994, yet another of Putin’s puppets – Alexander Lukashenko. Over the last 26 years, he has violently suppressed those who challenge his rule, either driving them into exile or imprisoning those who oppose him. This year saw one such man Sergei Tikhanovsky go to jail for attempting to topple the despot.

However, there is dissent in the air, in the shape of his wife Svetlana Tikhanovskaya. From stay-at-home mum to revolutionary icon, Svetlana, believed to be the true victor of the August elections, has rallied hundreds of thousands of Belarusians in protest. Thanks to Svetlana, the people have found their voice. The bonus? It doesn’t look like she is going anywhere anytime soon. Power to her…

China – with it’s ‘re-education’ centres which government officials claim are voluntary schools, but which are in fact indoctrination camps for Muslims. People snatched from their homes without explanation and imprisoned until they accept that two and two doesn’t necessarily make four.

‘Everything faded into mist. The past was erased, the erasure was forgotten, the lie became the truth.’

Next America, the new dystopian superstate and China’s little brother. It was a bright cold day in September, at the National Archives Museum as the clock struck thirteen. As Trump (friend to both Poland and Belarus’s leaders) the defender of American Heritage announced his plan to re-write the truth with his 1776 Commission to “help restore patriotic education to schools.”

This propaganda is a retaliation to the New York Times Magazine’s Pulitzer Prize winning 1619 Project – named for the year the first enslaved Africans arrived in the Virginia colony, and which reframes American history around the consequences of slavery and the contributions of Black Americans. The project has now become part of the curriculum in many schools. However, Trump has stated the Department of Education will defund those that continue teach the truth, labelling them as “unpatriotic.”

Then there’s Britain and BoJo, the Conservative government and his Brexit u-turn. And who like Trump and his cataclysmic failure in handling the pandemic are proof of what happens when society turns a blind eye to the ineptitude of ineffectual mediocre (usually white) men. We should be mindful that those who lay down the law are often the worst kind of criminal. I could go on and on and on, around the globe, the list of atrocities and wrongs is long.

So if we don’t wake the fuck up, pretty soon there won’t be anything to wake up to. Because when one spends most of their waking hours Infinite Scrolling, you are easy meat. With every glance, you gift them another piece of your mind.

By deleting my accounts, I gave up approx 4000 followers, which in the grand scheme of things isn’t much. Even so, I never let the following go to my head, because of those, I knew who actually ‘followed’ me. The rest were just watchers – the modern day equivalent of the curtain twitcher. So with the exception of a few, and they know who they are, saying goodbye wasn’t hard to do.

The engineers have brainwashed us into believing it is ‘likes’ that make us valid and that without social media, life is a ginormous FOMO. That without it in our lives we cannot exist. Wrong! Followers and likes are not an indication of worth. Svetlana Tikhanovskaya is proof we are more than just the sum of our parts. And seriously, what are you missing out on? Equate how many hours you spend on social media and then weigh up what you get back in return. My guess is fuck all with a dose of additional angst.

My advice for what it’s worth – check your screen time, and just remember, Time is precious and you can’t turn it back. Take those photos of your children, but print them out and fill photo albums instead. Make memories rather than fill little squares.

Read. Become a rebel while you still can. Connect with flesh and bone people. Find trust worthy news sites. I subscribe to The New York Times and The Washington Post. But Al Jazeera, Politico and The New Republic are free. Write.

“I was sort of convinced that it was possible that a politician would arise who was so outside the mainstream and so willing to say anything that he would capture the imaginations of the American people.”

While it reads like George Orwell and Margaret Atwood saw into the future, they are not fortune tellers. While acutely observational and terrifyingly portent, the novels are speculative fiction – the authors thread a needle and weave a stitch between past, present and future.

Stephen King did it with the Dead Zone, eerily predicting America circa 2016-2020. The parallels between power-hungry businessman-turned-politician Greg Stillson and Trump are uncanny. King described the character as someone who said “crazy stuff that nobody would possibly believe or so we thought, until Donald Trump came along.”

History has shown us there is a fine line between fact and fiction. So if we don’t get our heads out of our phones soon, one day we will look up and everything will have faded into mist.

Say’s it all when the engineers who designed FB and Instagram don’t let their kids use it. 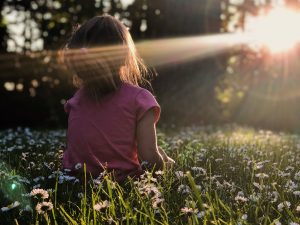